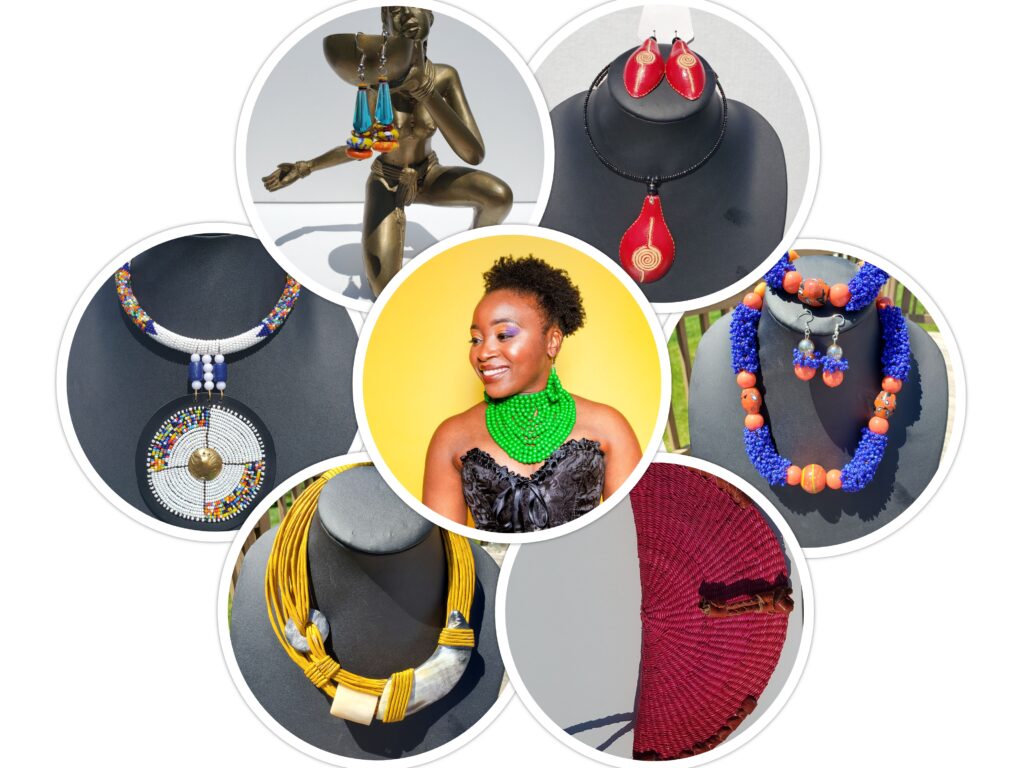 We are proud to showcase a wide range of products that bring together different colours, materials and creative techniques from all over Africa. Our collections tell stories of the culture and traditions of different African ethnic groups and bear testimony to the creativity of African artisans. The common thread that connects our collections is that no culture is static, timeless and insular, all traditions evolve over time. This is partly attributable to cross-cultural interactions brought on by influences such as urbanization, tourism and international trade.

While some critics warn against the ‘commercialization’ and ‘fashionisation’ of tradition and culture, we recognize the nuances that characterize modern African life: things remain the same, yet could not be more different; we hold on to the old, while embracing the new; and while we do not turn our backs on tradition, we eagerly look around us and into the future.

We can guarantee that we have a lil’ somethin’  that speaks to your inner Afrodiva!

Learn more about the Maasai Collection

Renowned for their distinctive customs and dress, the Maasai inhabit Kenya and Northern Tanzania in East Africa. They have traditionally been semi-nomadic people, whose lifestyle has revolved around cow-rearing. Recently, some have integrated into the mainstream economy, government and the school system.

Beadwork has long been integral to Maasai culture and Maasai men and women wear beads everyday. Women are responsible for beadwork. The Maasai initially made beadwork from natural materials like wood, stones and  shells; and later from glass beads acquired through trade. Traditional beads denote a person’s gender, age and social status. Special beads are also worn to celebrate events such as weddings and births. For example, a bride wears a flat round collar with a square and long strands of beads in the front. Each age-set of warriors is identified by the pattern of the pendant that its members wear.

The colours used in traditional Maasai beads have special significance: red signifies blood, bravery, and unity. White represents health, peace, and purity. Blue represents energy, and green is the color of grass. Black represents the people and their struggle. Yellow symbolizes the sun, fertility, and growth, and orange represents warmth, generosity, and friendship.

In recent years, Maasai beadwork has evolved beyond the ‘traditional’ colours and designs.  Both the “traditional” and “modern” designs highlight some distinctive and eternal features of Maasai beadwork: the bold colours, the meticulous attention to detail in combining colours and creating patterns; the drive to push the boundaries; and the  creativity to use beads to tell a story. 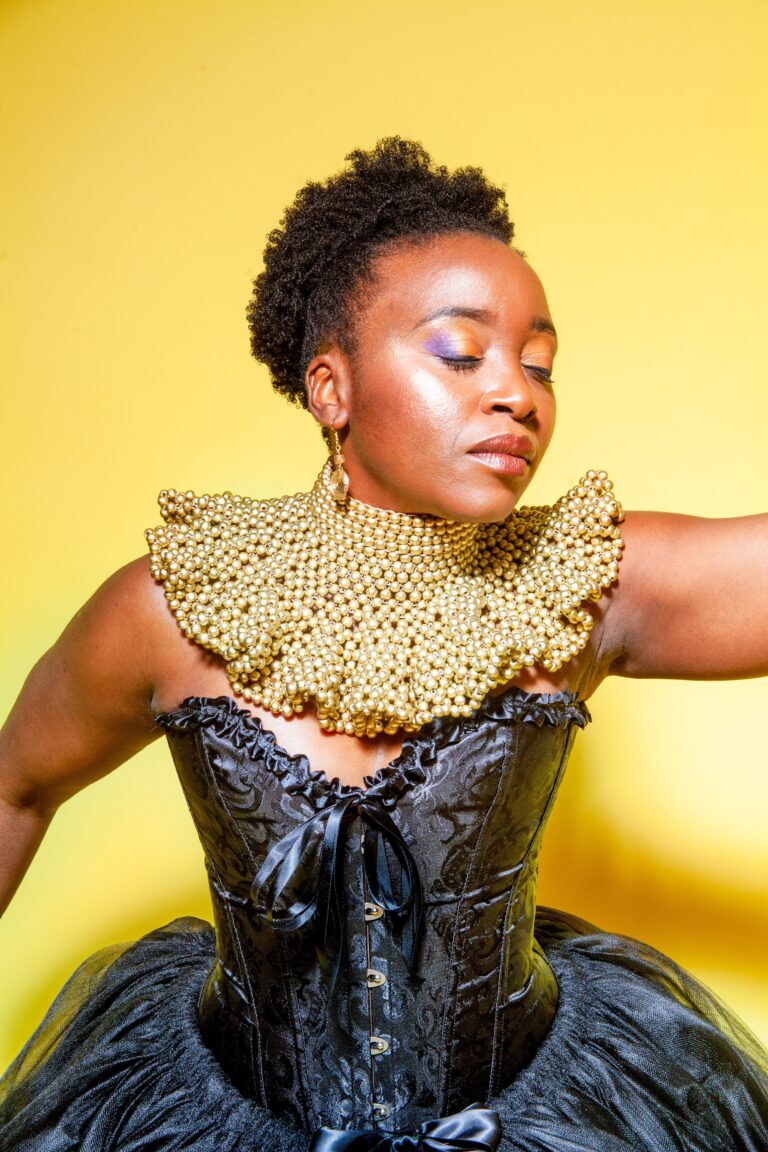 For centuries, women and men across the continent have used pieces of wood to adorn themselves. Wood has continued to be used as an adornment, through ornaments of different shapes and sizes, and through beads. But for decades, wooden beads have been used in very simple single- and multi-strand designs.

Something has changed in the past decade: artisans have used their imagination and creativity to apply age-old weaving techniques to large wooden beads. Artisans in Malawi (including the Yao people), South Africa (the Zulu, Xhosa and Ndebele) and Tanzania (the Maasai) have traditionally woven tiny seed beads together to make intricate patterns. This striking and eclectic collection is pan-African in outlook, with many of the pieces inspired by existing designs from southern, east and even west Africa.

Learn more about the Calabash Collection

Often what we call a calabash is a bottle-shaped gourd or a round gourd that grows on a vine known as Lagenaria siceraria. The gourds (also called calabash fruits) are edible as vegetables or they may be harvested mature and are dried for other use. These gourds are believed to have originated in southern Africa, but they are also widely used in east, central and west Africa and in other continents.Because these gourds are also called calabashes, they are often confused with Crescentia cujete: the round, hard, hollow fruits of the calabash tree, whose fruits are grown for ornamental and medicinal use in Africa and beyond.

All over Africa, calabashes are used to collect, carry and store liquids; as food containers and as drinking bowls. They are also used to make instruments, including as rattles, drums and percussion instruments. West African instruments including  the Ṣẹ̀kẹ̀rẹ̀, a Yoruba instrument similar to a maracca, kora (a harp-lute), xalam/ngoni (a lute) and the goje (a traditional fiddle) are also made from calabashes.  Calabashes can also be used to make puppets. In Ethiopia, children from the Erbore enthnic group wear calabash hats to protect them from the sun, while motorcyclists in Nigeria can use them as helmets.

There is a long history of the use of calabashes to make women’s adornments in West Africa, including Fulani brides’ adornments. Today, calabashes are more widely used to make jewellery, including earrings and pendants for necklaces.

Our West African collection showcases a diverse number of pieces bringing together different colours, materials, and traditions  from various ethnic groups in the region.

Krobo beads are named after the region where they have been made since the 9th Century A.D.,  but are now widely made all over Ghana. These krobo beads are usually made by men. Using a large mortar and pestle, the bead maker first pounds glass into a fine powder and  adds small amounts of ceramic powder or “mason stain” to intensify the base color of the beads. He then pours the powder into the (usually) cylinder-shaped holes in homemade clay moulds. He then inserts the moulds into a  fiery clay oven. After washing the fired beads, the bead-maker then paints before re-firing them.

“Rubber beads” are flat discs made out of recycled vinyl records and are made in a range of colours. They are produced in Nigeria and Ghana. Flat shell beads are made out of rare shells in different West African countries. Our leather jewellery is made by the Tuareg community of Northern Mali, who are currently refugees in Burkina Faso. Their pieces combine artisanal leather with hammered metals, wood or cow horn. including copper. 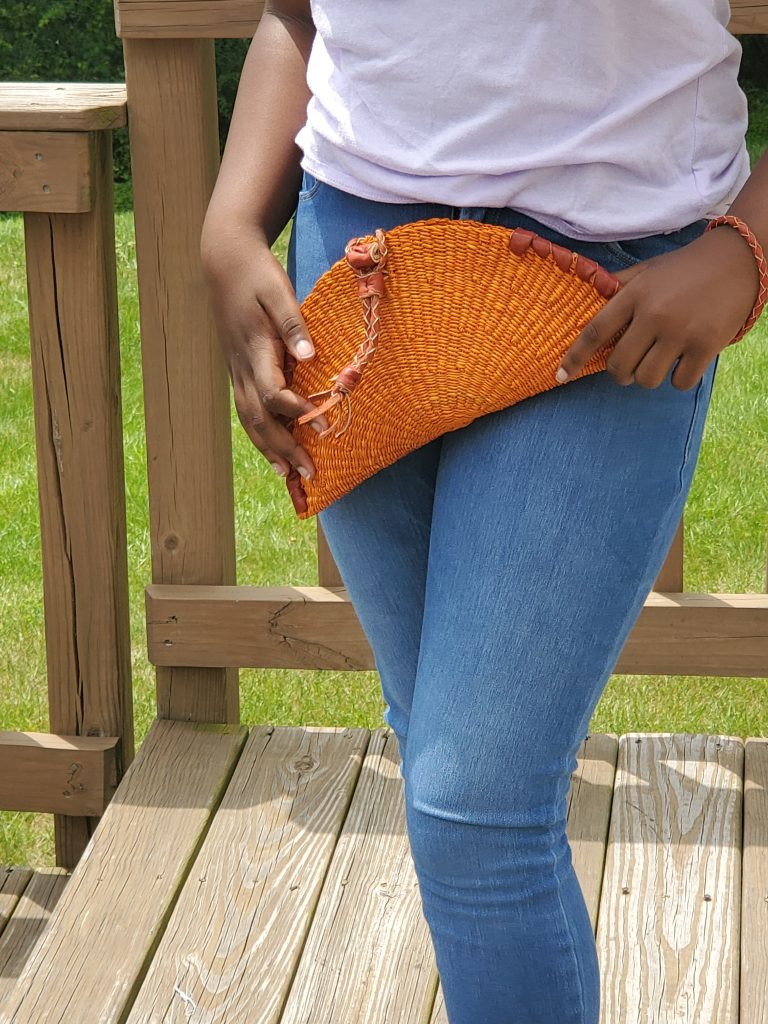 Take a look our vibrant range of Bolga purses, hats, earrings and fans that are exclusively woven by the indigenous Gurune (also known as Frafra) people around the town of Bolgatanga in Northern Ghana. “Bolga” (as it is locally known) is the crafts center of Northern Ghana and the people have been skilled weavers for many generations. The absence of fertile soil and the harsh weather conditions are not conducive for agriculture. As a result, women undertake handicrafts to supplement their incomes from subsistence farming. Elephant grass grows in abundance in this region. It is harvested and prepared to produce strong straw fibre. The straw is dyed using traditional plant dyes to produce the bright colours that Bolga baskets are famous for the world over. The woven baskets are then passed on to leather workers who use mostly goats leather to complete the handles. 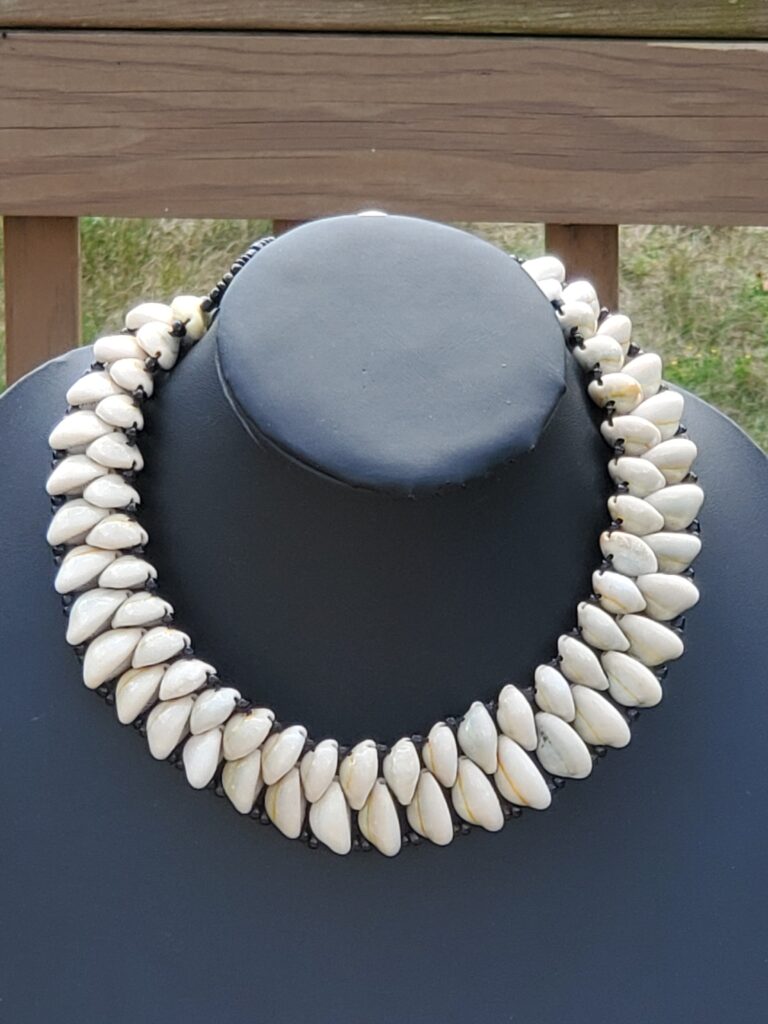 Learn more about the Mvenge-Mvenge Collection

We like to curate pieces according to their origins and tell the story of the ethnic groups that made them and the process of making them. But along the way we come across GORGEOUS, rare pieces that stand alone and that we cannot curate a specific collection for. When we know that you you will  DEFINITELY like them, we add them to our Mvenge-mvenge (mix ‘n’ match) Collection!

Learn more about the Mawoko Collection

This collection embodies the work of a women’s collective that we support as part of our corporate social responsibility initiatives. Mawoko Fine Crafts is a collective of six Zimbabwean women who are skilled in paper bead making, paper quilling, macrame and crochet work. Click here to read about Mawoko Fine Crafts.

While some of these skills have been passed on from one generation to another, they are not historically tied to specific ethnicities. Instead, they have become part of the fabric of Zimbabwean society as women seek ways to earn a living.

The history of crocheting in Zimbabwe dates back to the colonial era that ended with independence in 1980. Zimbabwean women learned how to crochet table cloths and other items to decorate their homes and to sell their wares in Zimbabwe and neighbouring countries in South Africa. These women built houses and educated their children on the revenue earned from ‘madhoyiri’ (doylies). During the late 1990s, crochet work became less popular as new home decor trends emerged. In recent years, there has been a revival, driven by mature and young crocheters who have kept up with trends in using crochet in home decor, clothing, jewellery and toys in other countries. In recent decades, Zimbabwean women began to learn paper bead making, quilling and macrame in their quest to make unique and attractive items to sell locally and internationally.